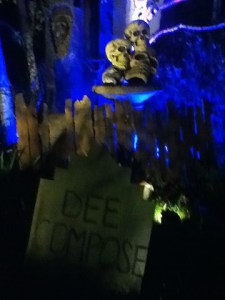 Forgotten Hollows presents itself as a nicely decorated yard haunt augmented with a small scare element. The decor consists mostly of skulls, skeletons, and gravestones, enhanced with a digitally projected ghost floating in the window. Overall, this is a very nice destination for neighborhood trick-or-treaters or haunt-seekers tracking down other Halloween home haunts in the area.

Note: We have seen Forgotten Hollows listed in Pasadena, but Mapquest shows it in Altadena. In fact, it is only a few blocks away from a popular trick-or-treating destination in Altadena: Pepper Drive, just north of Berendo has several decorated houses, including the Garden Path of Doom.

Hollywood Gothique visited Forgotten Hallows in 2016. At that time, rick-or-treaters seeking candy walked up a driveway and underneath a canopy, where a burst of fog obscured their vision, a spring-loaded spider attacked, and a human-sized bog monster appeared from nowhere. The candy cauldron was guarded by a silent pair, exhibiting the carefully cultivated immobility of mannequins – until unsuspecting costumed revelers reached for the treats, triggering a startling response from the previously quiescent figures.