The main attraction in the mecca of trick-or-treating that is Pepper Drive in Altadena.

2022 Dates: The yard haunts on Pepper Drive are a bit old-school in that they tend to run specifically on Halloween Night, starting at dusk and continuing till trick-or-treaters stop coming. A few houses may be decorated by the last week of October, but the Halloween spirit is not on full display until October 31. 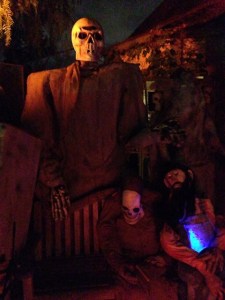 Pepper Drive in Altadena, between New York Drive and Glen Canyon Road, is a sort of  mecca of trick-or-treating, where sidewalks remain crowded with ghosts and goblins long after other neighborhoods have gone dark. There are numerous decorated houses up and down the street, featuring Jack O’Lanterns, giant spider webs, and seasonal lights, making this a great neighborhood to visit on Halloween Night.

Just north of Berendo Street, The Garden Path of Doom is the main Halloween attraction – an aptly named home haunt that requires costumed ghouls to ascend a twisted, treacherous cobblestone path that curves around a yard full of gravestones and up to a house haunted by motion-activated monsters. Along the way are several clever touches, including a talking mannequin, achieved not with wireless radio but an old-fashioned voice tube. The scare factor is enough to intimidate the tiniest trick-or-treaters, but their parents and older compatriots will be suitable impressed as well. The proprietor informs us that the Garden Path of Doom has been haunting decades. Thanks to assistance from the next generation, the haunt should continue for the foreseeable future.

The Garden Path of Doom Images