We are updating our Riverside Halloween Haunt Itinerary for 2016, in order to include a haunt that was on hiatus for during 2015: The Coffin Creek Halloween Attraction (sometimes known as Crossroads Haunted Village). Added to The Haunting of Corona home haunt; the Castle Dark Theme Park; and the Riverside Ghost Walk, Coffin Creek provides a quartet of Halloween attractions in the Riverside-Corona area. It would probably take logistical genius to fully sample all four haunts in a single night; hopefully, your enthusiasm will sustain you through your quest.

We have ordered the haunts from west to east, assuming that most of our Halloween fans will be driving from Los Angeles. Depending on the route you take, drive time should be about 40 minutes, cover 21 miles.

Note: Only Castle Dark is open this week. The other haunts launch in mid-to-late October – but it’s never too early to plan your Halloween haunting, is it?

Though not as elaborate as the more famous Halloween theme parks, Coffin Creek Haunted Village provides a nice variety of haunted attractions in a creepy rural setting; in fact, it offers something you pretty much can’t get in Los Angeles any more: an independently owned, multi-haunt attraction. This year, Coffin Creek features three mazes: The Haunted Asylum of Coffin Creek, The Catacombs of Guasti Cemetery, and the Prado Witch Trail. There will also be vendors at the Dark Shadow Market Place.

The normally family-friendly Castle Park transforms into Castle Dark on weekends in October. When the sun goes down, the terror arrives, courtesy of mazes, monsters, and revamped rides. For Halloween 2016, there are four haunted mazes: Demented Doom Mine (new); The Vortex (new); Shiverton Manor; and Ghost Blasters.

Ticket prices vary according to which attractions you want access to.

Castle Park also presents the kid-friendly Happy Hauntings on Saturday and Sunday afternoons from October 8 through 30. Starting at 3pm, activities include costume contests, pumpkin carving, and a safe, interactive trick-or-treating for kids 12 and under. Happy Hauntings is included with regular admission.

UPDATE: The Haunting of Corona was originally listed here. However, the haunt has revised its website to indicate that it will not be open for 2016. 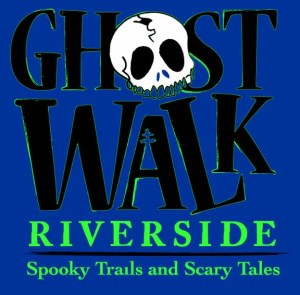 Ghost Walk Riverside is a community-oriented event offering free entertainment on stage in a festive outdoor atmosphere. The centerpiece is the “Ghost Walk” – a series of five tours to prominent buildings in the area (morgue, courtroom, etc), where local high school actors stage mini-plays with creepy stories.

The five tours offer three levels of fear: G, PG, an PG-13. Even the PG-13 performances are relatively mild. But watch out: after the plays are over, the ghouls show little interest in letting you walk away; they will pursue you as you make your way to the next location.

Depending on how much you want to walk, and how much time you want to spend, you could possibly squeeze in four of the five tours, but three is more feasible.

This year’s Ghost Walk takes place on October 28-29. Tours cost $15 each and begin at the Main Street Pedestrian Mall in Riverisde. Departures are from 6pm to 10pm, regardless of the weather. Get more info here.