Hungry for more Halloween Horror? Check out this November’s desert menu – if you dare!

There is only one cure for the Post-Halloween Blues: a healthy dose of the hair of the bat that bit you. Therefore, we provide the following list of Los Angeles Halloween attractions open for a few more days in November.

Tickets for all shows are sold out; however, some tickets may become available on Craiglist or on the Delusion Facebook page.

This year’s production, Delusion – His Crimson Queen, is another startling piece of work, mixing elements of a haunted house walk through with an interactive theatrical drama casting the audience as children seeking their missing mother – who happens to be a vampire. Their quest leads them through an old mansion populated by rival blood-sucking factions, who alternately aid or impede the quest.

The story element has been emphasized this year, but Delusion is still loaded with amazing stunts and effects. As usual, the interactive element is key: being a passive observer is not the way to go; volunteer and join in the fun whenever possible!

Field of Screams offers three mazes for one more weekend: Hunted, Descent, Illusions, Insanity, and Inferno. You can also enjoy The Last Ride, a creepy motion-simulation of taking your final ride to the cemetery – inside a coffin! Read our review of the haunt here.

Remaining Dates: Daily through November 27 except Wednesdays and Thanksgiving Day.

The Los Angeles County Museum of Art’s exhibition of props, costumes, paintings, and other objects d’art from the collection of filmmaker Guillermo Del Toro continues for most of November. In conjunction with the exhibition, LACMA is also screening several of Del Toro’s films:

Read our review of the exhibition here.

Fullerton Museum presents a Haunted Walking Tour that celebrates local legends and ghostly tales while educating visitors about the city’s colorful history. Locations vary, may include: Plummer Auditorium, said to be haunted by Louis E. Plummer and someone known only as the angry woman; the historic California Hotel, now Villa del Sol; and the home of Fullerton’s first woman auto dealer.

The two-and-a-half hour tours leave promptly at 6pm and are not recommended for those under 13.

Hopefully the post-Halloween lines will not be as ridiculously long as they were on opening night! As usual, Universal Studios offers the best production value of any Halloween event in Los Angeles, offering multiple mazes, a terror tram tour, shows, and rides. Our favorite this season was The Exorcist maze, but the year-round Walking Dead attraction is great, too. Read our review here.

What better way to defeat Halloween Withdrawal Syndrome than with a year-round display of horror?Along with other movie props, posters, and costumes, The Hollywood Museum houses houses a ghoulish exhibition on their lower level, known as the Dungeon of Doom. Here, visitors will encounter the figures of Elvira, Vampira, Freddy, Jason, Frankenstein, the Bride of Frankenstein, along with Hannibal Lecter’s jail cell from Silence of the Lambs, plus numerous other horror-themed props and posters.

Read our review of the Dungeon here.

Like the nearby Hollywood Museum, the Hollywood Wax Museum features a section devoted to macabre icons of the silver screen. The Chamber of Horrors features famous monsters from Fantasy, Horror, and Science Fiction Films, such as the Phantom of the Opera and Dracula, along with more contemporary figures such as Alien and Pinhead.

Now in its second year, Motel 6 Feet Under provides enjoyable scares in a clever arrangement that combines a walk-through with an actual maze, haunted by ghouls who refuse to show you the way out. The haunt made an impressive debut in 2015; it’s even better this year.

Read our review of Motel 6 Feet Under here.

Remaining Dates: Through November 4 (at least), from dusk till 11pm

This decorated yard haunt lasts all month long, with tombstones, lights, skeletons, and phantoms haunting passersby. The ghosts of times long past stir and wait for their chance to walk among the living. Will you come and greet them? They’re always looking for company. Come stay a while…a long while.

Read of our visit to the manor here. 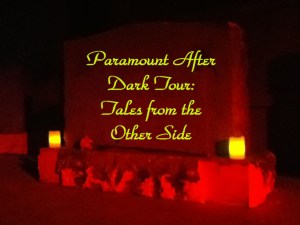 Tickets: $99. Walk-ins are welcome, but tickets may sell out in advance.

As the name suggest, the Paramount After Dark Tour offers a night-time variation on the usual Paramount Studios tour, with an emphasis on the legends of ghosts allegedly haunting the various sound stages. There is also an excursion into the adjacent Hollywood Forever Cemetery, lasting resting place of Vampira, Fay Wray, and Rudolph Valentino (one of many ghosts supposedly seen in the area).

For Halloween 2016, Sinister Pointe offers an interesting variation on the haunted house maze experience: a single walk-through with four separate branches. Each guest’s path is determined by a tarot card drawn by medium. Guests can visit on realm or purchase an all-night pass to experience all four. The latter is definitely recommended.

Read our review of this year’s Sinister Pointe here.

Zombie Joe’s Underground Theatre presents another collage of vicious vignettes, morbid mysteries, and eerie enigmas, creating a wordless nightmare vision that lingers in the mind long after leaving the theatre.

Read our review of Urban Death: Tour of Terror here.

Wicked Lit’s 2016 trio of plays (Anansi and the Demons, The Shadowy Third, From Beyond, plus the Camp Mountain View frame story) continues for two more weekends. As always, the immersive element of seeing classic horror literature staged in and around an actual mortuary and cemetery is not be underestimated, but that cause us to overlook the storytelling and performances that bring the tales to life.

Besides the performances, there is also a backstage experience: 12 guests may join the producers and/or directors for a tour behind the scenes, filled with anecdotes about the challenges encountered while staging plays in a mausoleum.